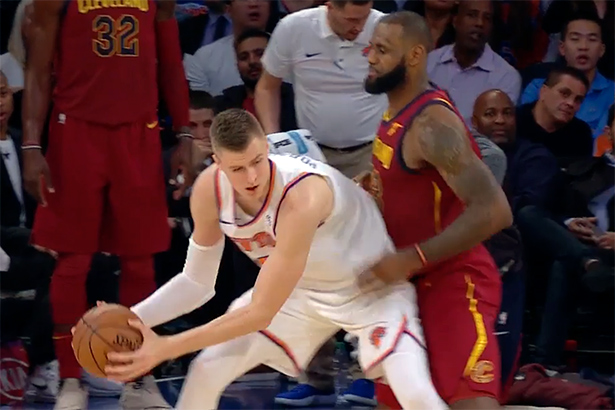 This time, the Knicks couldn’t seal the deal. After building a 23 point lead in the third quarter, New York let it go down the drain, as LeBron James and the rest of his Cavaliers made an incredible comeback and managed to win the game down the stretch, 104-101.

The game was fueled in advance by the comments James did a day prior, calling the Knicks out for not picking Dennis Smith Jr with their draft selection. Frank Ntilikina’s teammates – especially Enes Kanter – stepped-up to defend their rookie.

The two of them were also the protagonists of a play late in the first quarter when Ntilikina bumped into James’ chest after LeBron completed a slam dunk. Kanter hurried in defence, got nose-to-nose with the King and advised him to take the F train home.

Kristaps Porzingis had a quiet night, closely defended by James, and finished with 20 points. Because of that, the Knicks were outscored 43-25 in the last quarter.

“Look at the film of the last quarter, so many things to learn from that. What it showed was their experience. It’s a tough one. We really wanted to win the game.”

Cleveland shot close to perfect from behind the arc in the last act until they got back in the game. With 1:23 left on the clock, James delivered another three pointer, over Porzingis, that gave the Cavaliers their first lead since the first half. From that moment, the game was in the books.

Cleveland CavaliersEnes KanterFrank NtilikinaKristaps PorzingisLeBron Jamesrecap
← Previous Story Porzingis returns, scores 34 as he leads the Knicks past Kings, 91-118
Next Story → Knicks bounce back from trailing by double digits to beat the Jazz (101-106)