Knicks breathe fresh air as they beat the Nets 119-104 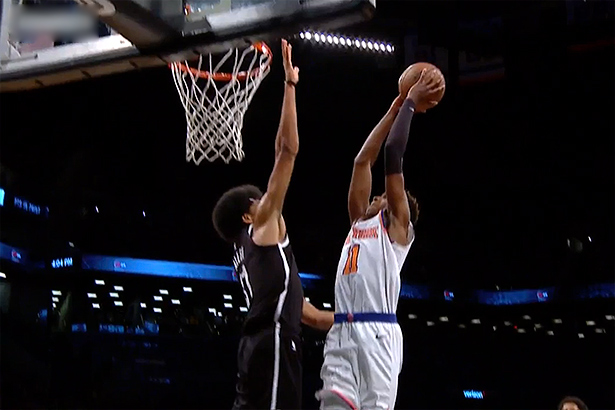 The Knicks really wanted this. After dropping the other day a 19 points lead, they needed redemption. And the Nets looked like the perfect candidate.

Playing technically on the road, the Knicks felt like home in Brooklyn and after going head to head in the first quarter, New York started to build and advantage that quickly went to 12 in the second quarter, then to 14 early in the third. But as they got closer to the final act, deja-vu happened. The Nets attempted a comeback and managed to cut the lead to just a couple of points before entering the fourth.

With another heartbreaking loss at the horizon, the Orange & Blue stormed into the last quarter with an 11-0 run, then continued to pour until they went up by 21 with 3:48 remaining. Brooklyn never came back and the Knicks wrapped the victory, 119-104 on MLK day.

Kristaps Porzingis looked highly efficient again after scoring 26 points and grabbing 9 rebounds. He shot 8-14 from the field including 2-3 from long distance. Michael Beasley led the bench with 23 points and completed another double-double game after collecting 10 boards.

But the big news came from the french rook. Frank Ntilikina played his best game of his career and needed just 3 more rebounds to knock down a tripple double. Ntilikina scored 10 points and dished 10 assists, putting up a game high plus- rating of 17.

Hardaway Jr. was rested after playing 33 minutes the other day while Enes Kanter’s minutes dropped to just 9 after himself received over 36 against the Pelicans.

“I guess coach said I played a lot of minutes (the day before), so he thought that I was tired. But I was pretty good, and I didn’t really feel tired. It’s my job, I cannot be tired. It’s my job so whenever he gives me minutes I just go out there and play hard. But I think he thought I was tired so, whatever. I just didn’t play. We won the game, we’re good. But if we lost, it would be a problem.” [Source]

The Nets were led by DeMarre Carroll with 22 points while Caris LeVert added 20 off the bench.

Statistically speaking, the Knicks shot over 50% from the field and over 55% from behind the arc compared to less then 40% by their rivals.

The Knicks improved to 20-24 before going on the longest road trip since the 1988-89 season, playing the next seven games away, most of them against Western Conference teams.

Another positive note came from the newest Knick addition, Trey Burke. Signed after a good run in G-League with Westchester, Burke is a product of Michigan where he was team mate with Tim Hardaway Jr. Named the 2013 National College Player of the Year, he was the 9th pick for the Timberwolves in the 2013 NBA Draft and one year later he made the all rookie first team.

Yesterday afternoon he logged his first minutes and points for New York. Burke played 8 minutes in the second quarter, scored 5 and sent 2 assists.