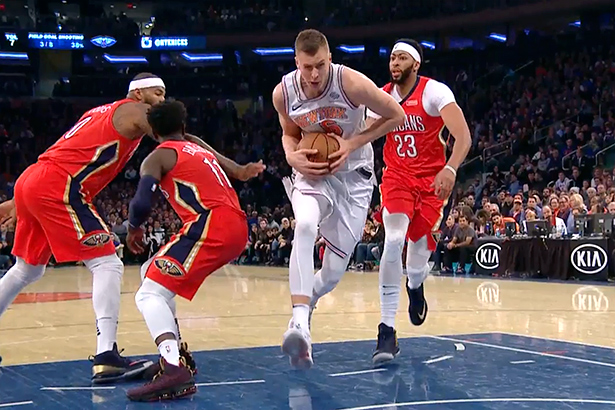 The Knicks led by 17 points in the first quarter, by the same amount in the second quarter, by 19 in the third period and went into the last act with 14 points ahead. However, the Pelicans managed to cut the deficit to single digit after every major lead. And in the fourth quarter they successfully came back to tie the game and send it into over time where they outscored the Knicks and won 123-118.

The Pelicans almost won it in regulation after E’Twaun Moore intercepted an inbound pass to Tim Hardaway Jr with 2.3 on the clock, advanced the ball on the Knicks’ court and launched a three pointer that hit the rim.

The Knicks were led by Kristaps Porzingis and Hardaway Jr who scored 25 points each. KP shot 10-24, had 5 steals and blocked 2 shots. Jarrett Jack scored 22 and dished 8 assists while Enes Kanter finished in double double with 18 points and 10 rebounds.

New York now falls to 19-24 and will travel to Brooklyn this afternoon and try to go 3-0 against the Nets.