Knicks can’t complete the comeback and fall to Grizzlies, 99-105 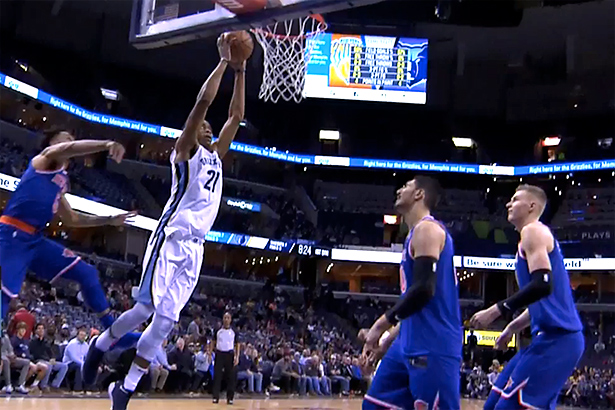 The Knicks found new creative ways to lose by sabotaging their own comeback. After trailing by as many as 18 points late in the third quarter, New York went on an 18-6 run that cut the lead to eight, then by the end of the fourth quarter they came to just three points behind the Grizzlies.

With 17 seconds on the clock, as the two teams were preparing for a jump ball, Courtney Lee was sanctioned by official Derrick Stafford with a technical foul for apparently talking smack to Memphis’ Dillon Brooks.

Tyreke Evans was sent to the free throw line and completed all three shots which sealed the game, 99-105.

“I’m lost for words. I wasn’t expecting to get a tech like that. (…) I wasn’t even talking to (Stafford). I was talking to the rookie and nothing was even said that should have even been a technical foul. I’ve been in this league 10 years. I’ve heard every combo with somebody being heated. … I’ve heard 10 times way worse things than what was said between me and (Brooks).”

Worth mentioning that Memphis played without three of their starters, including Marc Gasol and Mike Conley, yet the Knicks were unable to succeed on the road even if all the odds favored them.

For coach Jeff Hornacek, the loss was extremely disappointing, criticizing the lack of effort and defense of his team.

“They won the tip anyway. That had nothing to do with this game. It was from the start. We talked about setting the tone. We came out and I’m not happy with not closing out on guys, giving guys easy shots.”

Kristaps Porzingis led the Knicks with 21 points and 9 rebounds, Enes Kanter scored 20 and collected 9 and Lee contributed with 18 buckets. Michael Beasley nailed 18 points off the bench and grabbed 7 rebounds while Tim Hardaway Jr., who continues to come off the bench added 16 points in 26 minutes.

New York now fell 20-25 and lost their seventh straight game in Memphis, whom they didn’t defeated on their home court since March, 2011. The road trip will continue for the Knicks on Friday at Utah.

Courtney LeeEnes KanterJeff HornacekKristaps PorzingisMemphis GrizzliesMichael BeasleyrecapTim Hardaway Jr
← Previous Story Knicks breathe fresh air as they beat the Nets 119-104
Next Story → THJ returns to the starting five and scores 31 as the Knicks hold on to beat the Jazz, 117-115