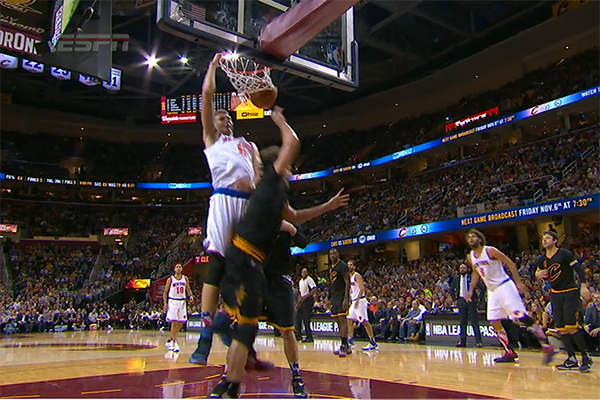 Carmelo Anthony scored 17 points and had 12 rebounds but the Knicks couldn’t keep the tempo from the first quarter (won 18-32) and faded back to lose 96-86 against a Cavaliers team that played without former knicks, JR Smith and Iman Shumpert.

Jose Calderon  had another soft night with 2 points and 5 assists and a very poorly job defending Mo Williams making people questioning more and more if he should still be in the starting lineup. Coming off the bench, Langston Galloway scored 12 points, Kyle O’Quinn dropped 8 while Derrick Williams had 7.

Both teams shot under 40% from the field but the Cavaliers drawn more fouls, being awarded with twice as much free throws than New York, and that’s one way the difference was made.

Kristaps Porzingis scored 13 points and didn’t seem to have any problems after the injury suffered the previous game. He got however in foul trouble as he was whistled for the 5th, early in the final quarter which made the Knicks effort to diminish Cavs’ comeback even more difficult, and that’s the other way the difference was made.

Sasha Vujacic and Robin Lopez combined for 15 points and 8 rebounds while Cleveland had 5 players finishing in double figures, with four of them in the starting lineup.

The Knicks will return at Madison Square Garden Friday night where they’ll meet Milwaukee Bucks again, in the attempt to win the first game at home.

What’s your take on the game?