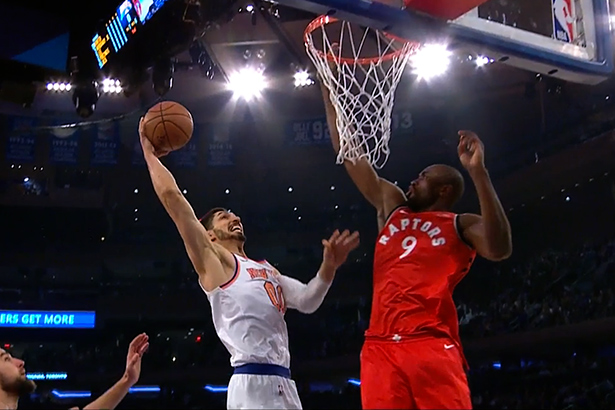 Kanter with the facial (MSG Capture)

The Knicks vowed revenge after the loss they sufferd a few days ago in Toronto. And as they defeated the Clippers, snaping a 10 game losing streak, last night they ended Raptors’ 8 straight wins against the Orange and Blue.

The Raptors had an 11 points lead at halftime and seemed to have the game going their way. But the Knicks entered the third act with an incredible 32-3 partial that included a 28-0 run propelling them to a 108-100 victory.

Tim Hardaway Jr. scored a career high 38 points to wich he added 7 boards and 7 assists, a performance that was last accomplished by Patrick Ewing.

Kristaps Porzingis finished in double double with 22 points and 12 rebounds, Courtney Lee added 15 buckets and dished 7 assists while Enes Kanter contributed with 11 points including a facial dunk against Serge Ibaka for the first couple of points of the Knicks.