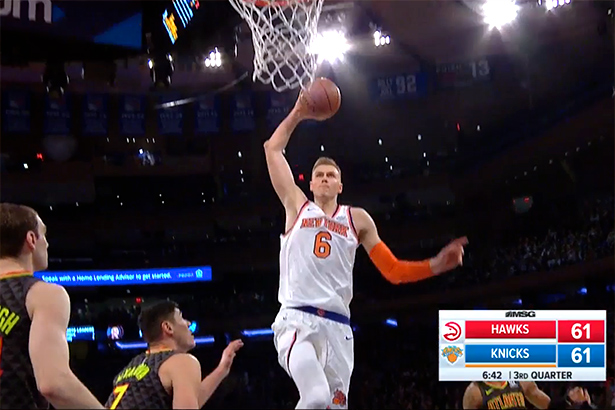 The Knicks trailed by a dozen or more in the first quarter of each of the previous 4 games. They lost three of them, including the trip in Chicago against the worst NBA team and succeeded once, against the Grizzlies at the Garden.

Last night, taking note on Jeff Hornacek’s statements following the Bulls game, New York had a different approach and didn’t allow the Hawks to go up by more then 4 points in the start of the game. However, that didn’t concluded to an easy win.

In fact, Knicks biggest lead came later in the fourth quarter when they managed to go up by double digits for the first and single time. It didn’t lasted because Marco Belinelli pushed his team back in the game and cut the lead to three with less then a minute to play. However, at the next possession, he missed a 27-foot three pointer and after Jarrett Jack responded with a two point jumper, the game was in the books; final score Hawks 107, Knicks 111.

Kristaps Porzingis scored a game-high 30 points, adding 8 rebounds and delivering 3 blocks. He continued to struggle from behind the arc, going just 1-5, but was 50% from the inside. Doug McDermottt on the other hand, who contributed with a bench-high 23 points, shot 9-13 including 2-4 from long distance.

Jarrett Jack was a key factor for New York, helping his team to get back in control in the second quarter on one hand, and delivering the key basket in crunch time on the other hand. He finished with a season-high 19 points and received praises from coach Hornacek.

“He’s a veteran guy and he knows how to play basketball. Some nights he looks like he doesn’t have energy, but he figures out to get to spots.”

Enes Kanter, who suffered an injury the other day against the Bulls and was in crutches for 24 hours, decided to play despite the fact that he missed three consecutive games earlier with back spasms.

For the Hawks, Dennis Schroder scored a team high 21 points, Ersan Ilyasova added 20, Taurean Prince dropped 17 while off the bench, Belinelli contributed with 13.

Knicks returned to .500 while the Hawks continue their tanking season dropping 6-20.