Don't Miss
Home / Recaps / Michael Beasley steps up in crunch time to help the Knicks defeat the Lakers in OT, 113-109

Michael Beasley steps up in crunch time to help the Knicks defeat the Lakers in OT, 113-109 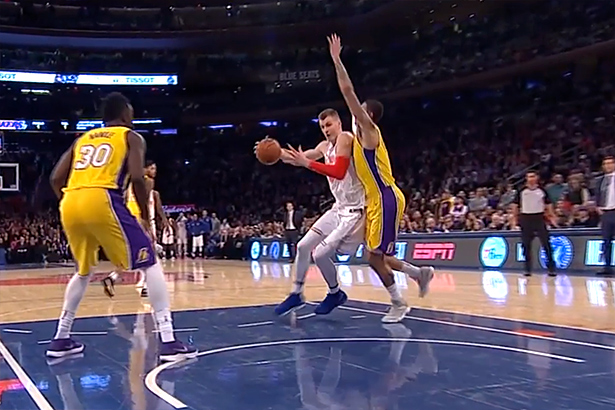 It was one of the most anticipated and exciting games of the season. Lonzo Ball’s debut at Madison Square Garden drew a lot of attention and coverage. With his father courtside, several seats away of Spike Lee and Magic Johnson, Lonzo’s made shots energized LaVar Ball who put up a show of his own, high fiving with fans around him after every basket.

However, it was the guys in white jerseys that celebrated at the end. Trailing by as many as 10 in the second quarter, the Knicks fought back and nullified the lead by halftime.

The third quarter went into a shooting frenzy, in which, during a span of 2 minutes both teams made back to back buckets. Ball stared it with an alley-oop dunk off Kentavious Caldwell-Pope assists. Then, Kristaps Porzingis replied with a three pointer. At the next play, Lonzo shot himself a 25 foot three pointer to put the Lakers up by 2. Enes Kanter tied it with a dunk off Courtney Lee’s assist. Eight seconds later, the Lakers’ rookie scored again on a layup but Kanter quickly made it even. The show was ended with another set of three pointers from Brook Lopez and Porzingis.

The last act was extremely intense as the lead changed 3 times in the first six minutes, after which the Knicks took a fragile advantage that grew as time went by to 5 points with 2:06 on the clock. But a couple of clutch points made by Caldwell-Pope and Kyle Kuzma helped the Lakers to push the game into overtime.

The overtime belonged to Michael Beasley. Playing his first minutes in crunch time, your favorite player’s favorite player scored 6 points (after scoring the same amount in the fourth quarter), made one crucial steal and dished one assist to help his team win 113-109.

The Lakers missed their chance to get another OT period after inexplicably forgetting to foul with over a dozen on the clock. By the time they did it it was too late.

Porzingis scored a game high 37 points, grabbed 11 rebounds and blocked 5 shots while shooting 5-8 from behind the arc. He became the first player in NBA history to score that many points while collecting that many boards blocks nd going so well from long distance.

Kanter was once again in double double with 14 points and 11 rebounds, Lee and Doug McDermott dropped 10 points each while Jack sent 10 assists.

Frank Ntilikina was not to be forgotten. Playing his first game on national TV and competing against the most hyped rookie since LeBron James, the French-ise posted a season-high 13 points shooting 3-4  from behind the three point line, rebounded 5 times and delivered 5 assists in less then 30 minutes.

Lonzo Ball finished with 17 points for the Lakers, to which he added 8 boards and 6 assists. Kyle Kuzma, the other Hollywood rookie, outscored Ball as he ended up with 19 points. Kentavious Caldwell-Pope scored a team high 24 and Brook Lopez contributed with 14 buckets.

The Lakers dropped 10-16 after they just tied consecutive wins, while the Knicks improved to 14-13 and will play the next game on the road, technically, in Brooklyn.