Porzingis returns, scores 34 as he leads the Knicks past Kings, 91-118 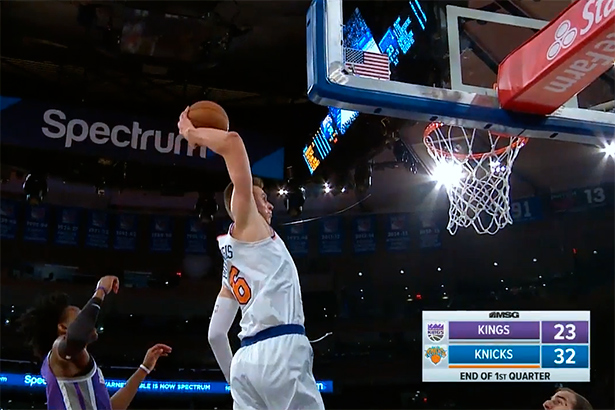 With Kristaps Porzingis back in action, beating the Kings was just a formality.

The Latvian star missed the previous game against the Magic due to elbow and ankle injuries and his status was unclear. However, one day prior to the game, the team announced that his injuries healed and that he’s ready to return.

In spite of Kings’ hot 10-0 start, the Knicks needed just 8 minutes to take their first lead and from that point, they never gave it back.

Porzingis dropped 34 buckets and Courtney Lee finished with a season-high 20 points, shooting 5-6 from behind the arc, to help New York roll past Sacramento, 91-118.

Enes Kanter marked a new double-double with 17 points and 13 rebounds, while off the bench, Damyean Dotson delivered 14 points in 14 minutes.

The Knicks built a ridiculous 30 point lead late in the third quarter while shooting 54% from the field and over 47% from long distance, the Kings instead shot under 40%.

The highlight reel, however, happened at the last possession in the first quarter. Frank Ntilikina held the ball as seconds were running out, faked a three, went inside and connected with KP for an electrifying alley-oop that made the Garden go wild.

Skal Labissiere led the Kings with 19 points as his team lost its 9th game of the season. Sacramento are now just 1.5 games ahead of Dallas, who are in last place in the league alongside Atlanta.

For Porzingis, this is his eighth game of the season when he scored at least 30 and is now third in the scoring leader board, with an average of  30.4 points per game, after Giannis Antetokounmpo (31.7) and James Harden (30.5).

“I don’t want to say that but it seems normal for him to just go out there… He has such an advantage at that height. He can just shoot over guys. And, they can put long guys on him, and he still can get it over.”

Next-up: Knicks will host the Cavaliers on Monday night, from 7:30 pm.

This was a long break, but we’re back and so are the Knicks! Last night, in the preseason opener,...