After a good first quarter, Knicks fall 123-112 to the defending champs 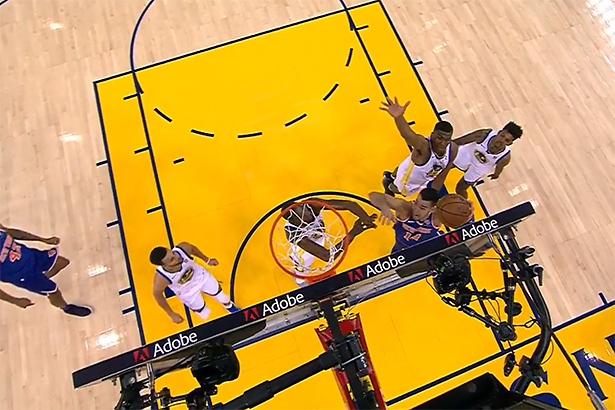 Playing without All Star Kristaps Porzngis, the Knicks had a strong first quarter against the defending champions and took a 10 point lead in the first minute of the second quarter. They led the entire first half and didn’t looked as if they were missing two major pieces – Kyle O’Quinn was also sidelined with a sore left calf.

But as the Warriors’ engine began to heat, the lead dropped gradually until it reversed and eventually New York bowed, 123-112.

Michael Beasley got another start and led the Knicks with 21 points, shooting 8-15 from the field. Kevin Durant, who declared himself his fan, spoke highly of him:

“I love what he’s doing. He never had a fair chance. I said in a comment earlier this year before the season where he said he was just as skilled as LeBron [James] and myself, and I was feeling him on that. He can score from anywhere. He can score on anybody.”

Durant finished the game with 14 points and 14 assists, but it was Stephen Curry who burried the Knicks. With a game high 32 points, Curry scored most of his points from long distance, where he went 8-15. He only scored one from inside the arc, the rest of them being from the free throw line.

The Warriors stormed the Knicks in the second half and by the looks of it, they would complete a blowout as their lead rose to 18 points in the last quarter. New York, however, managed to finish the game with an 11-5 run, that saved them from an embarrassing loss.

The Knicks fell six games beneath .500 (21-27) and will play back to back games against Phoenix and Denver this week.

Golden State WarriorsKristaps PorzingisMichael Beasleyrecap
← Previous Story THJ returns to the starting five and scores 31 as the Knicks hold on to beat the Jazz, 117-115
Next Story → Knicks complete the seven game road trip with win in Phoenix (107-85)